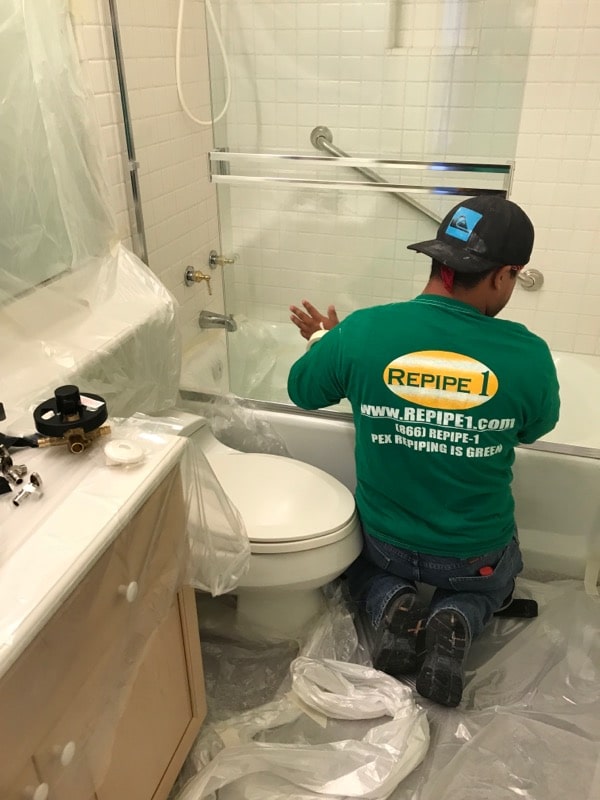 Commercial projects are now starting to see the benefits of repiping with PEX. It is now known to make a commercial repipe more cost-effective. So while most pipes used today are either copper, CPVC, or PEX, listed below are the 3 main reasons to choose PEX for your next commercial repiping project.

PEX is made up of a Cross-linked polyethylene, a material engineered especially for plumbing that is newly engendered material that that is more durable and corrosion resistant than other materials such as copper.

Repiping with PEX is Simple

Because of the flexible nature of PEX, it can be more easily bent around corners than other materials such as copper. This speeds up installations because it eliminates the need for tedious fittings, gluing and hot work. Turn around on projects using PEX are therefore faster and cost less.

The Power Commercial Repiping with PEX is Demonstrable

The flexible PEX pipes have been used in residential water systems for a number of years now. But more commercial projects are starting to see the benefits of using PEX pipes in new construction or while renovating an older building. Here are three examples of construction projects where PEX was used to replace the previous pipes.

The Arts is a large apartment complex in Lafayette, La. For a number of years, the old pipes had been leaking and mold had started to grow creating a health issue for the 184 tenants. The owners decided to replace the old pipes with PEX, flexible plastic pipes made from cross-linked polyethylene. The project had a few obstacles that had to be overcome from the start.

The first obstacle was how to complete the repipe while the apartments were occupied. The second obstacle was that the apartment complex was a slab building that sat directly on the foundation. The original pipes were installed through the first-floor slap. In order to save time and money, the repipe company hired decided to run the new pipes through the first-floor ceiling. This helped them to avoid costly repair costs after the job was completed, as well as avoiding electrical and concrete barriers.

When it comes to restoring older buildings just renovating the outside is not enough. What we don’t see, the issues hidden within the building’s walls, often need the biggest makeover such as the existing plumbing and heating systems. Rather than repair old, corroded pipes, a complete repipe needs to be done. Historic building’s pipes were likely made from iron or galvanized steel. Both of these materials are now outdated when it comes to plumbing.

An example of such a restoration is The old City Hall in Tulsa Oklahoma which was redesigned and is now the Aloft Hotel. This project was not just a repipe but a complete renovation. But since the old City Hall was a historical building there were added requirements and restrictions on how those renovations could be made.

The old building included marble walls and terrazzo floors that the developer wanted to keep intact. But preserving these original fixtures were not the only problems the plumbing company had to face. The ceiling spaces were very tight and the hallways only dropped two feet. They also had to repipe a number of different systems including fire sprinklers, waste disposal, exhaust air, heating, cooling, and hot and cold water.

Again PEX pipes were chosen for their cheaper price. Plus they are quick and easy to install so the plumbers were able to work alongside other contractors like the electricians and painters. This helped to keep the project on time with the specified deadlines without compromising the installation of all the necessary water systems.

When school officials ot George Fox University in Newburg, Oregon decided to renovate the old dormitory they were looking for added energy savings. They decided they wanted to add new pipes to their old radiators. The contracting company hired for the job met with the school officials along with other professionals to determine the best course of action.

After brainstorming several different ideas, the group finally decided that PEX was the only choice for the job. The renovation of the old dormitory was quite complex in large part because of all the concrete walls. Any other material other than PEX would have required extensive demolition to install the new pipes. Then the costs would have been quite high to rebuild or repair all of that damage.

Instead, they chose to follow the old piping penetrations but instead of just knocking down walls, or creating holes in them they upgraded to new window installations. The old pipe layout didn’t line up with the layout of the dormitory rooms, but the flexibility of PEX helped them to readjust the original pipe layout.

The cheaper costs and flexibility of repiping with PEX is making it more popular in commercial buildings. The plastic piping is quicker and easier to install, which helps companies meet construction deadlines and stay within the original budget. If your commercial building is in need of new pipes, give us a call and one of our specialists will be happy to answer all of your questions.

We repiped over 50,000 homes and apartments over the years and we always put our clients and their homes first with the best value and quality in the industry.

All You Need to Know About a Repipe in Orange County